Parishioners will receive a letter in the mail from Fr. Jeremy Bock in the next days, which provides the faithful with information to move through this time.  Please click here to read the letter: Letter to Parishioners.

Palm Sunday - Year A - a voice within

Please click the links below to view videos provided by Father Jeremy:

Living Holiness-Doing Dishes to Save the World

Positive message for our Assumption students!

Stations of the Cross

Such is the Kingdom - Sheperds

Such is the Kingdom - Holy Week.

Such is the Kingdom - Palm Sunday.

Father Jeremy offers us guidance and hope during this time:

My Jesus, I believe that you are in the Blessed Sacrament. I love you above all things, and I long for you in my soul. Since I cannot now receive you sacramentally, come at least spiritually into my heart. As though you have already come, I embrace you and unite myself entirely to you; never permit me to be separated from you. Amen. - St. Alphonsus de Liguori

Please pray for an end to the spread of this virus and its impact on all of us. May God bless and protect us all.

Your gifts will help us reach the most vulnerable during this time.  Please consider signing up for online giving through our website.  You may also mail in contributions to:   2310 7th Ave. E. Hibbing, MN.  Thank you for your continued generosity!

Letter to the Faithful

Father Jeremy's bulletin article for the weekend of April 5th

“My heart overflows with great mercy for souls, and especially poor sinners...It is for them that the Blood and Water flowed from My Heart as from a font overflowing with mercy. For them I dwell in the tabernacle as King of Mercy. JESUS, I TRUST IN YOU. St. Faustina.. “(Diary, 367) 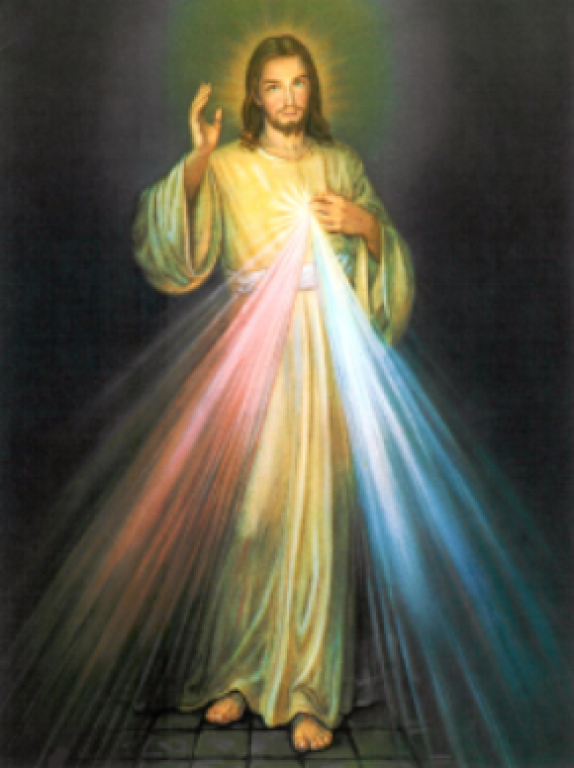 Due to the COVID-19 Outbreak  Beginning Friday, March 20th, Daily, Sunday and Holy Week Masses through April 20th have been suspended.   Blessed Sacrament Church doors will be open Monday-Friday  from 8 a.m. - 7 p.m., and Saturday and Sunday from 9 a.m. - 7 p.m.,  for those who would like to come in and pray.  Our Weekly Bulletin is posted on our website. You may also choose to make your contributions through online giving through our website.  To make an online gift, please click here:  Weshare Online giving. Should you need assistance or any spiritual support, please call the parish office 262-5541. Please see the weekly bulletin for more details. 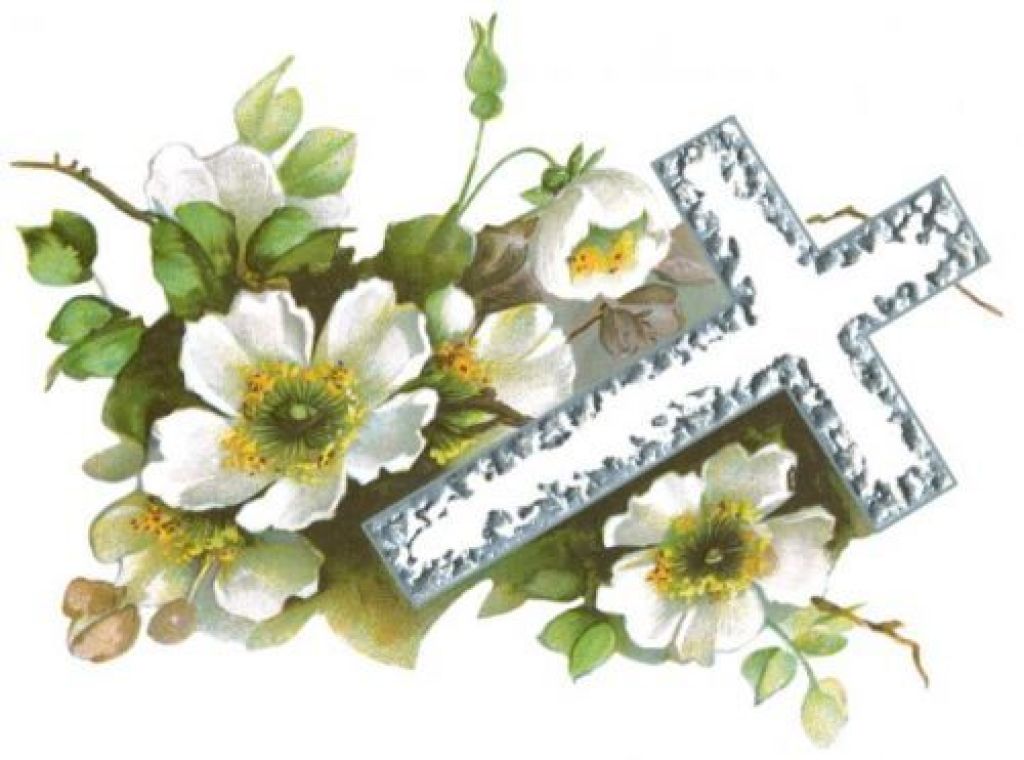 Thank you to those who donated in honor and memory of loved ones for flowers.  Please click here to see a list of those who were honored with a donation to our flower fund: Easter Flowers.

To Fr. Gabriel Waweru and the parishioners of Blessed Sacrament parish,

Brian Lederer, who previously served as an Associate Pastor at Blessed Sacrament Catholic Church and Immaculate Conception Catholic Church in Hibbing, MN, has voluntarily requested, and Rome has granted his dismissal from the clerical state, effective March 14, 2020.  This means that he cannot exercise ministry as a Catholic priest and is dispensed from priestly celibacy.

Help us stay connected with you! 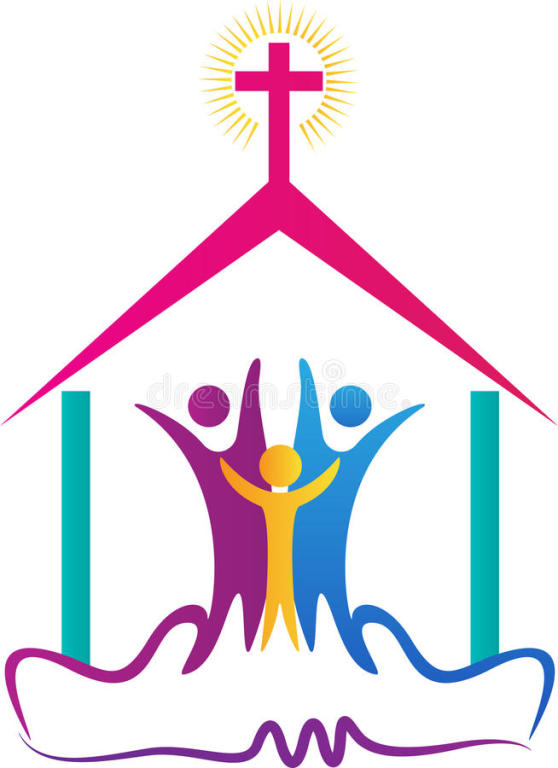 Parishioners!  We want to stay connected to you during this time.   Please take a moment and click the link to submit updated contact information to our Parish Staff.  Parishioner Information Form.  God Bless you and stay well.

The 8am Mass is broadcast live each Sunday and re-broadcast during the week on Wednesday at Noon and Thursday at 10am.  Daily Mass is available on YouTube:  m.youtube.com/user/dailymass

"Rest with the Rosary"

Please join Fr. Jeremy and Fr. Sampson every evening at 7pm, live on Facebook to "rest with the rosary."  Let us be united in prayer! 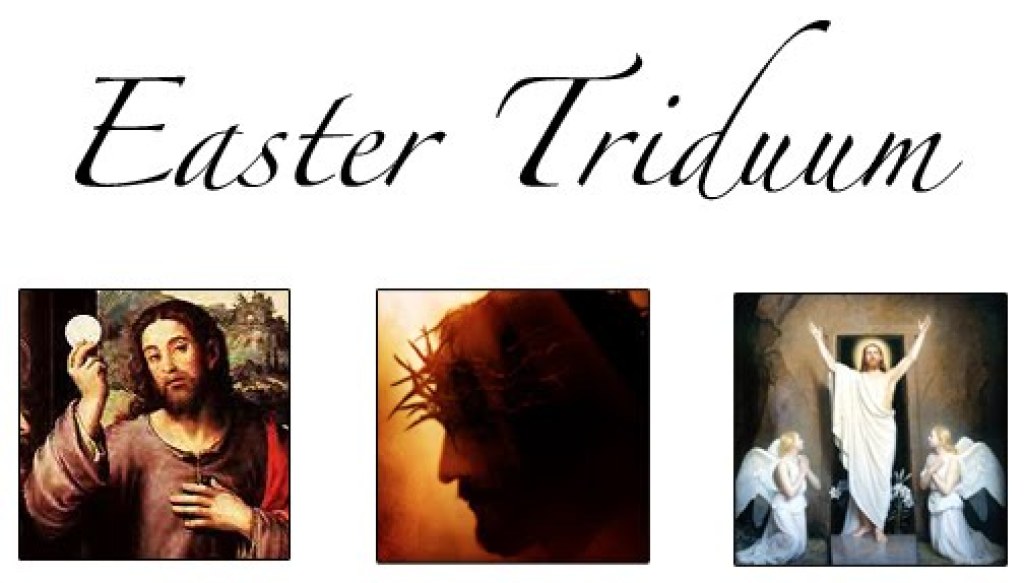 The Parish Office will be closed April 9th-April 13th (Thursday-Monday) in observance of Easter.  God Bless!

A question on the mind of many people during any crisis is "how can I help?". As a parish we can come together to help our neighbors through this difficult time.  Prayer and a kind word goes a long way to easing the burden, especially for those who are alone or isolated.  Check in by phone with those who you know may be alone.  If you know someone who needs some help, let us know. The parish has a limited supply of food that can be distributed to those who need it.  We are asking for additional donations of food, supplies, diapers, baby wipes etc. Though the governor has asked us to "shelter in place" food distribution is an essential service and one that we can assist with.  Our parking lot link door will be open for drop off donations, Monday through Thursday from 8 to 2.  By reaching out to others we can show our love for Our Lord, Who gave His all for us, by loving our neighbor as our self.

Mass at Guardian Angels on Tuesdays at 2:30pm is cancelled until further notice.

Grandparents' Day and the Assumption School Spring Program scheduled for March 26th is cancelled at this time (there is a possibility to re-schedule).

The Women's Conference scheduled in Duluth on March 29th is cancelled.

Lenten Adoration is closed.  The Adoration Chapel is closed until further notice.  The Faithful are invited to pray in the Church anytime between 7am-7pm, where Jesus is present in the tabernacle.

All Masses are suspended until April 20th.

Stations of the Cross will not be led by a Priest.  Booklets are available in the Church on Friday evenings.  Those faithful who want to pray may do so.

Adoration Chapel Closure: Following the conclusion of the hour of Mercy at 4pm March 16th, 2020, the Adoration Chapel will be closed until further notice. The Faithful are encouraged to pray in the Church anytime from 7am-7pm, where Jesus is present in the tabernacle. Between the hours of 4pm-7pm, please use the link door entrance off the east parking lot.

All Religious Education classes are cancelled at this time.  Please check the website for important information.

54 Day Novena for Courage and Protection 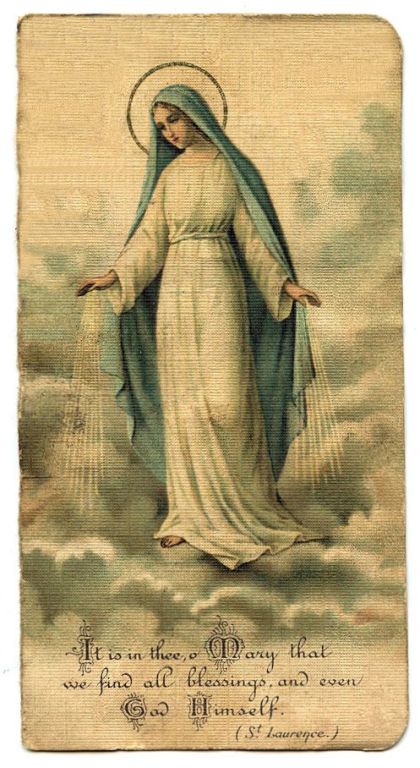 Please join in this Novena for Courage and Protection! 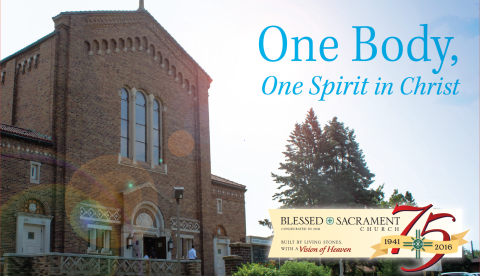 As a parish, we are committed to working together to make Jesus Christ known, loved and served in our families, throughout the Hibbing community and in the world. We are also committed to live as the Lord taught, drawing inspiration from the scriptures and strength from the sacraments, especially the Eucharist. Our parish strives to nurture spiritual growth, share the gifts God has given us, and invite others into a relationship with Christ.

We are One Body, One Spirit in Christ. 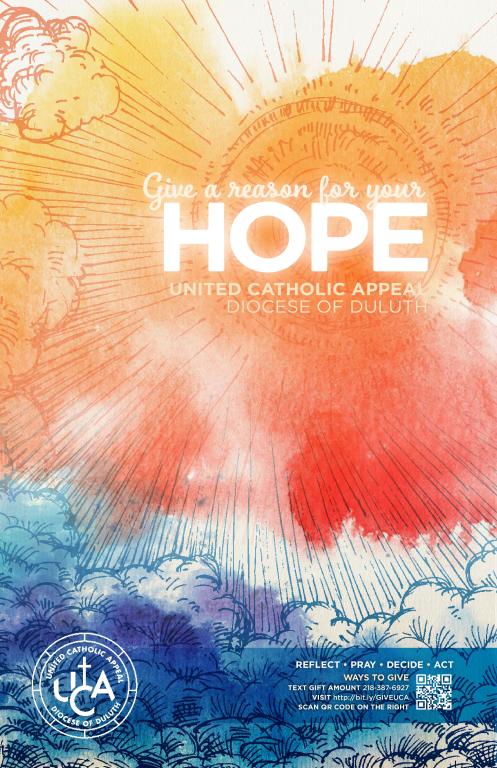 An update on the Immaculate Conception Closure

Here is an update of the Immaculate Conception since the closing on December 8th:

As more developments happen, we will keep you informed. 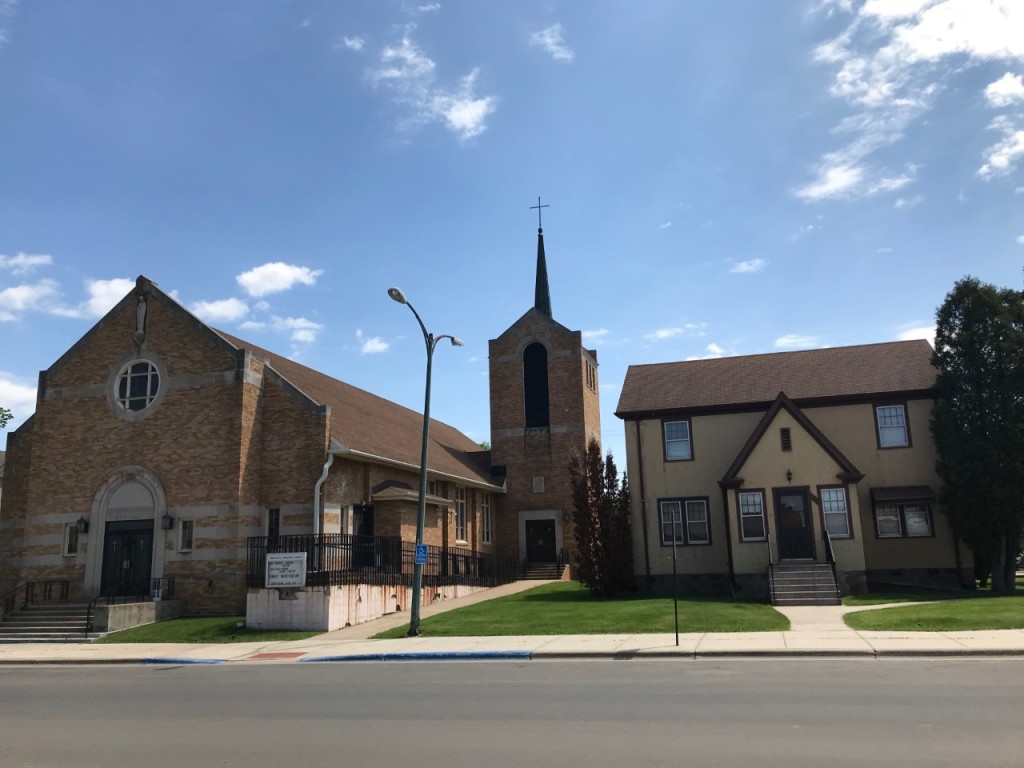 Immaculate Conception Church is now closed.  Please join us for 8am Mass at Blessed Sacrament Church.  This Mass will be broadcast live and re-broadcast during the week on Wednesday at noon and Thursday at 10am.

Prayer for a New Bishop 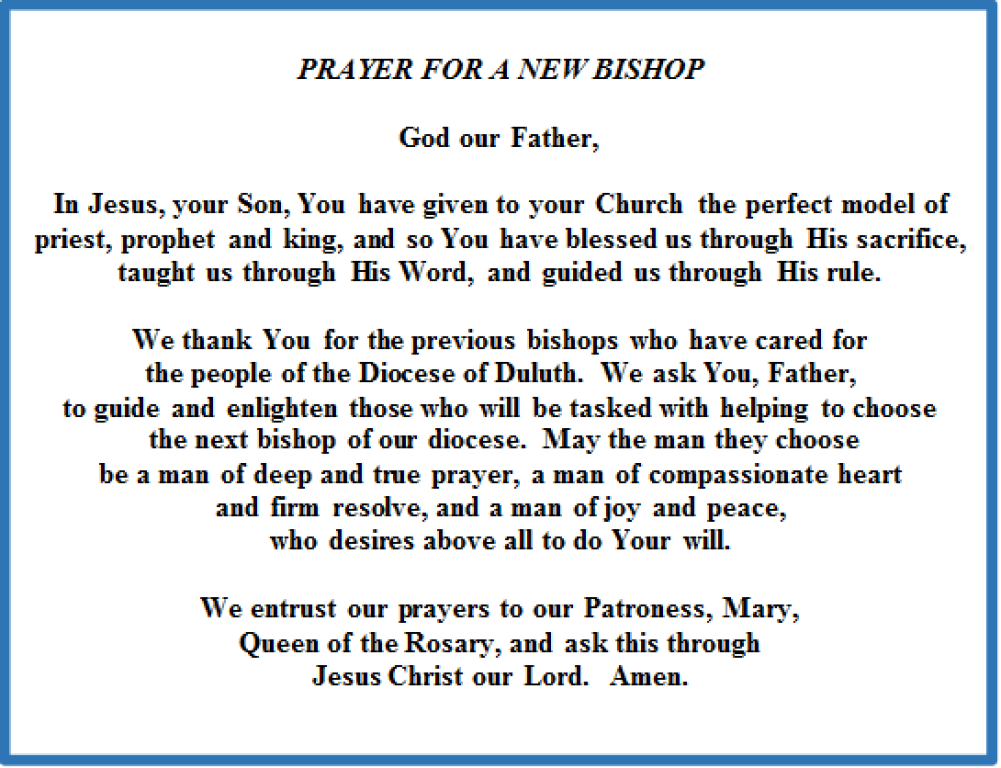 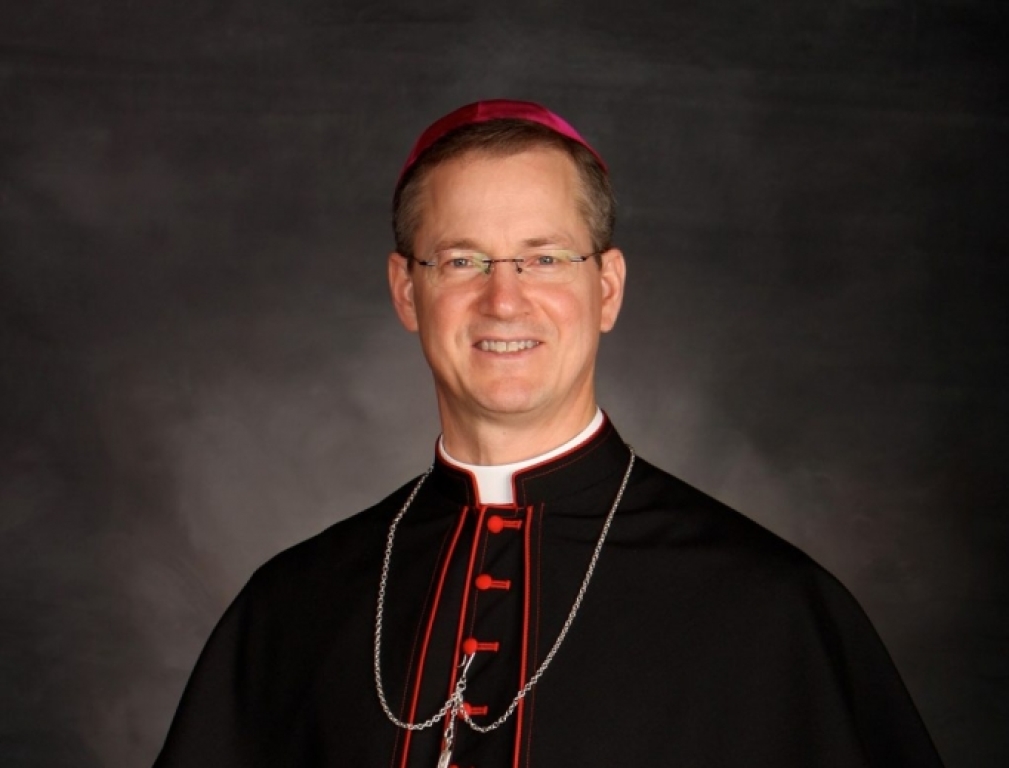 To honor the mission and ministry of Jesus Christ as carried out by Bishop Paul D. Sirba, memorial gifts may be sent to:

The Diocese of Duluth

The Parish is excited to offer wonderful and free Catholic content for everyone in the family!  Movies, books, studies, and much more is here and FREE for you as a member of Blessed Sacrament Parish.  Please click the link and create a user name and password using the parish code.  ENJOY!

In Nov. 2015, the Parish received new Missals from JourneySongs, which is a permanent, hard cover book that includes Sunday readings for all three liturgical cycles (A, B, & C), many beautiful prayers and reflections and Rites of the new Church.  We are offering Hymnal Memorials.  If you would like to dedicate a book “in memory of a loved one, or to honor someone you know”, please fill out the Hymnal Memorial form and return to the Parish Office.  Forms can be found at the church entrances, or please stop by the Parish Office.